09.08. 2007 Politics
While widely recognized as holding conservative ideological and political views, the Hu Jintao leadership has been given reasonably high marks for pushing forward economic reforms first initiated by the late patriarch Deng Xiaoping. According to World Trade Organization provisions, the Chinese Communist Party (CCP) has opened up an unprecedented number of sectors for foreign equity participation. Yet, the authorities have at the same time tightened control over other aspects of the economy. This has resulted in the truncation, if not atrophy, of thousands of private firms. The latter are in danger of being edged out by powerful monopolies and oligopolies that are controlled either by the party-and-state apparatus or by senior cadres and their offspring. 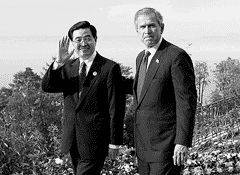