14.06. 2007 Politics
One important way in which many PLA exercises now attempt to enhance the level of realism is by incorporating opposing forces. For instance, according to a January 2007 Jiefangjun Bao report, the plan recently conducted an opposing forces exercise involving some of China’s most modern destroyers. 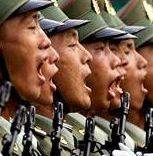 Indian Army Chief of Staff General Joginder Jaswant Singh, having recently returned from a week-long visit to China, announced that Delhi and Beijing would hold their very first joint army exercise in October. The exercise, in which 100 Indian soldiers will be sent to China, will be centered on conducting counter-terrorist operations (PTI News Agency, June 7). Given China's concerns regarding the separatist activities in Xinjiang and Tibet, the Chinese military has expressed interest in learning from their Indian counterparts who have had significant experience in counter-insurgency operations in the Kashmir region and in the northeast. While China and India have viewed each other with suspicion since the 1962 border war, the joint exercise reflects the ongoing efforts by both countries to improve the bilateral relationship. In November 2003, the Chinese and Indian navies conducted joint naval exercises for the first time in the East China Sea, and in April 2005, the two countries forged a "strategic and cooperative partnership for peace and prosperity" (The Hindu, November 15, 2003; People's Daily, April 12, 2005). In spite of these developments, however, the territorial disputes over Arunachal Pradesh and the Ladakh region in the state of Jammu and Kashmir remain unresolved and continue to be a contentious issue between the two countries (China Brief, December 19, 2006).