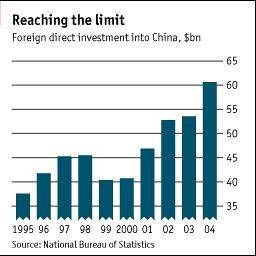 ITS rapid emergence as one of the world's biggest recipients of foreign direct investment (FDI), even briefly surpassing America two years ago, has been a source of enormous pride to China's leadership, and a cause of enormous envy to many of its neighbours. So how much should the Chinese worry about signs that inflows this year are levelling off? The commerce ministry says that FDI in the first nine months fell by 2.1% compared with the same period last year. Many economists predict that, for the whole year, the inflow will be slightly down on last year's record $60.6 billion. This would be the first such drop since 1999 and end a period in which investment has grown annually at a double-digit clip (except, thanks to the SARS respiratory disease, for a puny 1.4% in 2003). Last year's inflow was 13.3% higher than in 2003. Given the sheer scale of FDI flows—the cumulative total by the end of last year had reached $562 billion—few expected such rates to continue for many more years. The floodgates were opened by China's entry into the World Trade Organisation in 2001. That lowered barriers to investment and trade. Ironically, given the foreign complaints aroused by China's trade surpluses with developed countries, 63.3% of China's export growth last year was produced by foreign-invested enterprises, up from 56.8% in 2000. What may now be starting to slow is the practice of moving labour-intensive factories to China to manufacture products for export. Taiwan, one of the biggest investors in China, has already moved so much of its electronics production to the mainland that it now makes only the highest-technology components at home. Unless the Taiwan government takes further steps to liberalise hi-tech investments in the mainland, which it restricts for political reasons, the rush could be over. A saturation of investment, both foreign and domestic, in some Chinese industries may be acting as a deterrent. Intense price competition and rising raw-materials prices have cut profit margins. Last week Volkswagen, a big investor in China's carmaking industry, announced that it would cut investment plans for the period between 2006 and 2008 by 40%. The German manufacturer has suffered a serious erosion of its market share and profits in China as a result of an upsurge of investment by competitors. This is not wholly bad news for China, which has been trying to curtail investment in overheating sectors. It would be happy to see less investment in property, for example. Last year the property sector accounted for nearly 10% of total FDI inflows, the biggest destination for foreign investment after manufacturing (71%). FDI inflows into property remains relatively strong but utilised foreign investment last year in the cement industry, which China has also been trying to cool, fell by 67%. But even if double-digit FDI growth is a thing of the past, the desire to invest in China is hardly going to dry up any time soon. Investment for supplying China's domestic market will take up some of the slack. The Economist Intelligence Unit, a sister company of The Economist, forecasts continuing growth in FDI to the end of the decade after a decline this year, albeit at diminishing rates. Some investors worry that the corporate-tax rate might increase to align the rate paid by foreign firms with that levied on domestic firms. But Arthur Kroeber of the China Economic Quarterly says that this is unlikely to happen right away. Despite reports of upward pressure on labour costs, no convincing evidence suggests that China is about to lose its comparative advantage in labour-intensive industries. Profitability has suffered recently, and there are many complaints about the protection of intellectual-property rights, corruption and the murky regulatory environment. But surveys still suggest that investors rate China highly. The UN Conference on Trade and Development said last month that 87% of multinationals it surveyed ranked it the world's most attractive place to do business. In the first nine months of this year, the value of new contracts signed but not yet implemented rose by 22%. This figure is notoriously unreliable as an indicator. In September alone, however, actual FDI was up 3%. The “bottom line”, says Jonathan Anderson of UBS, a bank, is that China will continue to attract around $5 billion a month. It can hardly complain.